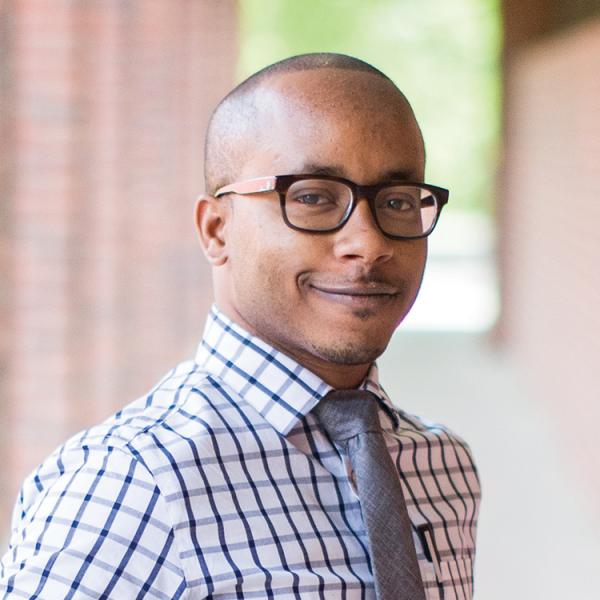 Reggie Leonard has long held an interest in technology and anything that exists on the bleeding edge.

“So Big Data was one of those things that just kept coming up,” he says. He read books and articles on the subject while working as a career counselor at Liberty University.

And then he saw a job posting at the University of Virginia to work in career services at the Data Science Institute (DSI). “Within a month of me seeing the posting, I was up here starting,” he says. “Things just happen really quickly around here, which is a pace I love to work at.”

No two work days are exactly the same for Reggie. He spends a lot of his time meeting with students and connecting with a wide range of employers, corporations and agencies who are interested in hiring data scientists. He prospects for job leads and connects with recruiters. He talks with executives about how they can frame out a data team for their companies. And he organizes numerous events, from smaller networking meet-ups to large-scale conferences, all over the country.

Quite simply: Reggie stays very busy. But he loves the agility that the job requires — and the way that his role constantly brings him into contact with others.

“I love connecting with people, and I love that I get to do that with all types of people, from undergrad students all the way up to executives of companies and all the way down to stealth-mode startups that aren’t allowed to say what they’re doing yet,” he says.

He particularly enjoys organizing what he refers to as “creative collisions”: pulling people together who should meet but don’t usually have a context or reason to be in the same room. “But once they are,” he says, “magic happens.”

“That’s one of the things I love about networking events and putting on events in general: It’s getting people in a common space.”

A favorite memory of Reggie’s is from a networking event he organized in San Francisco. Two students in the Master of Science in Data Science (MSDS) program joined him in flying across the country, and there they met one of the employers in attendance.

“One of the students ended up being interviewed at the networking event and then the next week got a job offer,” he says. “What student flies across the country to go to a happy hour, first? And then gets a serendipitous interview connection there and then gets a job the next week? I thought that was pretty cool.”

“I almost feel like I get to see the future before it happens.”

The primary piece of advice he’d give to people entering the field of data science is to remember that it’s still such a young discipline. The jobs are plentiful and in high demand (part of his work, he adds, is helping alumni know how to navigate recruiters trying to poach them from current positions), but the lingo in the job descriptions isn’t always consistent.

“It’s almost like the Wild, Wild West, and so understanding that can help temper your expectations in terms of going into the job market,” he says. Many companies will use buzzwords when hiring, such as “machine learning” or “AI,” but they could mean very different things from the next company. “It’s one of those areas where you’re going to have to do a lot more legwork than expected to uncover those right opportunities,” he says.

But he loves guiding MSDS students through these challenges as they prepare to begin their careers.

“I almost feel like I get to see the future before it happens,” he says. “That’s one of my favorite things about working with the students, because they’re literally going to be creating our future. It’s fun to be a part of their development process along the way.”