With the start of the NCAA college football season, fans are gearing up to cheer on their favorite team. How likely is it that their fan favorites will win the championship? Master’s in Data Science students Anoop Nath and Cepehr Alizadeh may know with the help of the Sports Analytics Club.

Under the guidance of Assistant Professor of Data Science Jon Kropko, Anoop and Cepehr started the Sports Analytics Club in September 2021.

“The Sports Analytics Club is the first student organization formed and run by M.S. in Data Science students,” said Kropko. “Clubs like this allow students with shared interests to support each other as they learn more about ways data science can be used in the real world.”

According to Wikipedia, sports analytics is defined as a "collection of relevant, historical, statistics that can provide a competitive advantage to a team or individual.” But according to Anoop and Cepehr, both students on the online program, the definition depends on who you ask.

“To someone who’s a casual fan, it’s looking at the box or looking at the percentages and taking away what the performance of the players on the field was based on these numbers [this doesn’t make sense]," explained Cepehr. “To others, it could be insights—the same data that you’re working with—to create predictions or to analyze the deeper level of the performance of the teams. It could also be somebody who enjoys legalized gambling on sports. But I think at its most basic level it’s taking sports data and transforming it into insights that are very clear and concise.”

After gauging interest in forming a club with fellow students, Anoop says Professor Kropko led the club’s coding exercises, ensuring even those who weren’t familiar with sports analytics learned the basics.

“When I started, I knew very little about how to code,” recounted Cephr. “When we held the first meeting, Professor Kropko made us share our screens and he walked us step-by-step how to code. It was invaluable because it gave us the courage to apply that to projects outside of school.”

The club now operates under three pillars, which Anoop explained. "The first one is to meet and talk about data and sports analytics. The second one is to invite guest speakers. And, the third one is to hold competitions like hackathons every semester."

Cepehr and Anoop use Zoom to lead the club’s coding activities, introduce guest speakers, and participate in competitions. The hybrid model allows master’s students in both data science program formats, residential and online, to participate. With different time commitments, term lengths, and even time zones, it can be a challenge to get everyone in the club together.

“This isn’t something that has ever been done before. It’s been great to develop relationships with students in the residential program who are in a faster paced program than we are,” Cepehr said.

The Sports Analytics Club not only creates a bridge for online and residential master’s students to meet, but also connects students to alumni.

Anoop recalls a guest speaker from last year. “We had an alum come speak as a guest, Joseph Weiss Lucky. He works for the Detroit Lions as an analytics manager and graduated from the M.S. in Data Science residential program a year ago. He came and spoke with the group and gave lots of insights. It was pretty cool because he was at Ford Field when he did the Zoom call and showed us the entire stadium."

As Anoop and Cephr gear up for another year of the club, they invite any students interested in sports analytics to join. 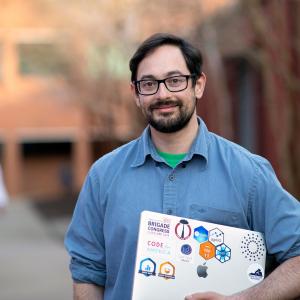 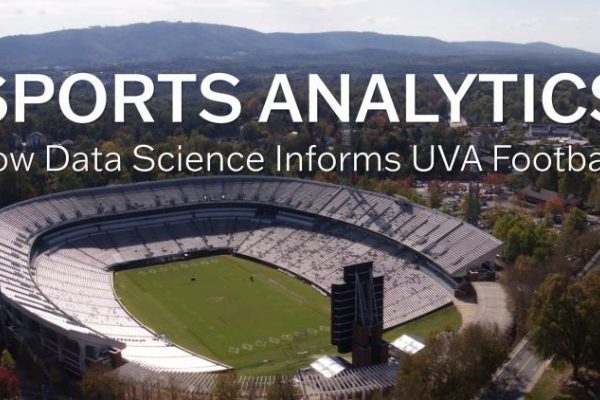 Matthew Edwards is a student in the online M.S. in Data Science program and the Director of UVA Football Analytics. Learn more about his role in UVA football.