In a collaborative showcase, the inaugural Data Justice Academy joined the Diabetes Research Internship Program, the UVA School of Medicine, and other summer research programs, for a poster presentation.

Over eight weeks this summer, Data Justice Academy scholars have participated in mentored research under the leadership of School of Data Science faculty, staff, and alumni.

Research topics ranged from police surveillance and COVID vaccination numbers to opioid deaths and long-term trends in housing instability. Students say while their topics covered many forms of data justice, their research was all about making data accessible and telling the story of disenfranchised groups.

“One takeaway I learned is data science can be created into a narrative for anything,” said Joya Wheatfall-Melvin, a rising third year at Spelman College. “When you look at numbers and plot maps you think, that looks nice or it’s confusing to the eye, but it can narrate the entire story of a city. Now, you're looking at it thinking okay, there’s not as much homelessness because they already have a good homeless plan.” Wheatfall-Melvin was under the leadership of Associate Dean of Diversity, Equity and Inclusion, Siri Russell, researching local government agencies' resources for asset limited income constrained, employed constituents (ALICE). 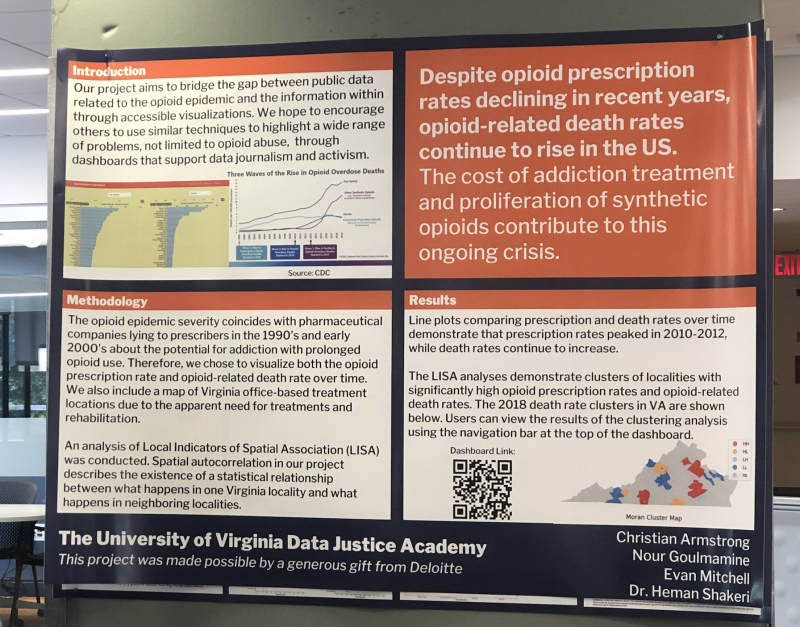 Carlos Gonzalez Alvarez, a rising junior at Bates College, added, “The main goal for my project is that anyone can access either through a phone app or an internet search their own police department, and they can learn about the technologies that are in place. Try to get a general sense of, what surveillance they're under. So, raising awareness.” Gonzalez Alvarez joined Data Activist in residence Renee Cummins, researching police surveillance technology.

As they wrapped up presentations and reflected on their summer at UVA, students agreed there was a lot to learn.

“Being a computer science major, I knew I had an understanding, but this was my first time truly working with real data.” said Sherilouise Scott-Dixon, a rising senior at Virginia State. “There was a learning curve”

While many of the research students major in computer science, math, and economics, others came to the program with backgrounds in Spanish and political science. These cohort members say they were not only able to gain a summer of data science knowledge but also in their fields.

“We knew nothing coming in and we’re able to present something like this and it’s still in our discipline. I think the main thing is that data science is so much more multidisciplinary, that it can be incorporated. It can be any subject, any industry really,” said Cole Whittington, a rising sophomore political science major at Boston University.

When asked to summarize one of their biggest takeaways, Data Justice Academy student researchers agreed.

“You can do anything in eight weeks.”